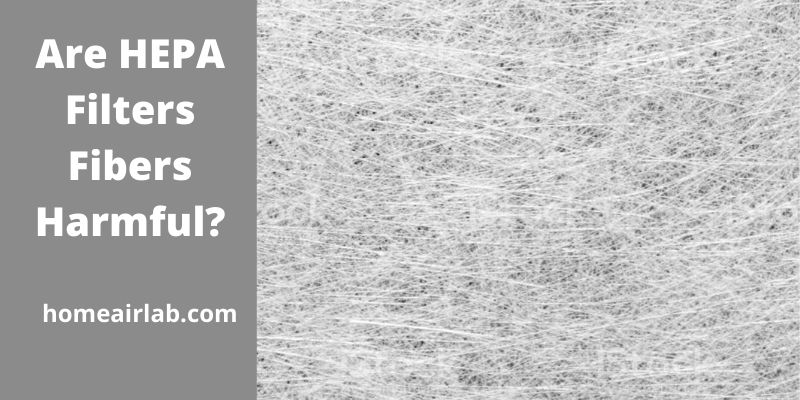 HEPA filters are made of some synthetic fibers that in time can break off and spread through the air. This means they can get into your lungs. So are these HEPA filters fibers harmful to users? Find out here.

There was a scientific study dealing with this issue. They studied fiberglass filters because those are commonly used in air purifiers that use HEPA filters. But it should be stressed that this is not the only material used for such a purpose. The picture below (from Wikipedia) shows the filter and the zoomed view of its randomly distributed fibers. In my separate text you an read more about HEPA filter efficiency and what exactly it can remove from the air.

In the mentioned experiment, they used special filters that were able to collect such eventual pieces of the fibers, because the pores of the filter they used were smaller than the size of the fiber pieces.

They have concluded that:

All in all, there are such fibers in the air. Now, remember the title above, are these fibers’ particles harmful or not?

There was another study that was addressing this issue, entitled “The Pulmonary Response to Fiberglass Dust”. This was a Report of the Committee on Environmental Health by the American College of Chest Physicians. Perhaps it is best that you see their conclusions:

So they write that there is “no evidence to indicate that inhaling fiberglass is associated with either permanent respiratory impairment or carcinogenesis”.

However, there is yet another study where the authors claim that “…There is some evidence of elevated respiratory system cancer (RSC) risk associated with non-baseline levels of the average intensity of exposure to respirable glass…”

There is one more study where you can read: “Among rock/slag wool workers, the risk of lung cancer increased with time-since-first-employment and duration of employment.” They conclude that “These results are not sufficient to conclude that the increased lung cancer risk is the result of exposure to rock/slag wool; however, insofar as respirable fibers were an important component of the ambient pollution of the working environment, they may have contributed to the increased risk.”

What to conclude from all this?

In fact, I am not so sure what to think. As it appears, these HEPA filters do shed pieces of fibers, and manufacturers always give some time for use after which the filter should be replaced. Perhaps this shedding is one of the reasons for this. From what you have seen above, there is some risk. I guess it is best to replace such a filter well before its prescribed deadline. What do you say, are HEPA filters fibers harmful or not?